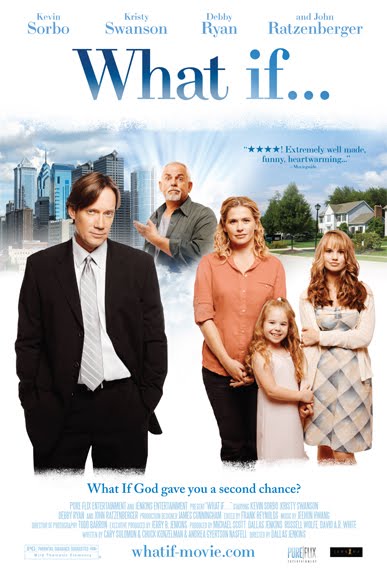 Not only is this the movie title of the film I’d like to discuss, but this is a very important question every screenwriter should have in mind when plotting their story.  You will need to have an interesting “What if” scenario that will keep your audience riveted to your movie until the very end.  In the 2010 movie, “What If…”, we are introduced to Ben Walker (Kevin Sorbo) who leaves his small town girlfriend behind to pursue a lucrative career as an Investment Banker.  After a meeting up with a “tell-it-like-it-is” angel Mike (John Ratzenberger), Ben is supernaturally placed in a sort of parallel universe where he lives the life he was meant to if he had followed his true calling.

This is a very interesting premise.  It is a “What if” for the big “What if?” question.  Your “what if?” can literally be anything your imagination can dig up.  You want to set up an intriguing dilemma to your “what if” that will really keep your audience engaged.

Ben had to face the question, what if he had followed God’s call on his life rather than pursue the life he had chosen.  At first, we see that Ben resents the life he should have chosen.  He much rather prefers the money and prestige that came with his lifestyle as a successful executive.  But as he gets to know and understand what he truly missed out on, he decides that the life he walked away from is the life that he is meant to live.

There are so many different ways to construct the “what if” of your story.  It can be something way out there like “What if Santa Clause was really an alien from another planet and pretending to be a German folklore, was part of his plan to take over the world.”  Or you’re what if can be more along the lines of everyday life, “what if an unpopular girl, in a small town, wanted to join her High School’s all boy football team.

Give a lot of thought to the “what if?” of your story; it will make for a great story and excellent character development